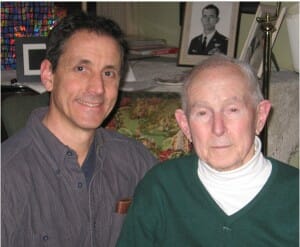 It was only going to be a manuscript for the family. I didn’t start out to write and eventually publish a 500 page book – that thought never crossed my mind.  Since my father wasn’t going to write down his story about his World War II experiences for our family, I took it upon myself to do it.

Briefly, here’s my father’s story:  He was a B-24 bomber pilot who flew only four missions before his airplane was shot up during a mission to Berlin on the 8th of March, 1944. He and his crew were forced to bail out of the stricken bomber over Holland. Once on the ground, of the crewmen that were still alive, only my dad evaded immediate capture. In fact, he spent nearly five months with the Dutch Underground living in various safe houses in Rotterdam. Eventually, he was betrayed and became a prisoner of war until his liberation on the 29th of April, 1945.

The best way to start the manuscript process was simple. I interviewed him and recorded the conversations. Every couple of weeks, over a two-year period, I interviewed my father. When we were finished, we had nearly 40 hours of audio burned onto CDs.

That was fine, but not the end of it. To convert the audio interview into a readable format, I needed to transcribe all those hours into a word document and finally print it out, which was to be the final manuscript for our family.

However, something happened during the process of transcribing and writing the interview. I actually started to pay attention to the details. During the audio recording of his story, I was focused on the questions I would ask and the timeline of events. But as I launched into writing, the details and characters of his story came alive for me. I began to get a glimpse into lives of the brave civilians who risked certain death – and the deaths of their family members – to help Allied airmen like my dad who were unfortunate to find themselves on the ground in enemy-occupied territory.  Quickly, I realized that I needed to write not only my dad’s story for our family, but I also wanted to tell the world about the brave folks in Rotterdam.  I wanted to tell their story, too, so that they would be honored for the risks they took. Sadly, many of the brave people who helped my dad did not survive the war. Their story became just as important to tell as my dad’s.

So nine years later, after hundreds of conversation with my father, hours and days of further research into the details that continued to come to light, and even a trip back to Poland and Germany, I finally realized my dream and published the book, Two Gold Coins and a Prayer:The Epic Journey of a World War II Bomber Pilot, Evader, and POW, in May of 2010.

The book has been very well received. In fact, I’ve been greatly surprised and pleased to learn that it won several prestigious national awards in 2011. Everywhere I find myself promoting the book, I am taken aback by the wonderful conversations I have with people who want to tell their story, too. Many people who have a close relative who served in WWII, want to talk about them and their story. For many of those folks, the father, uncle, or grandfather is no longer alive, yet they are eager, sometimes desperate, to share what’s on their heart.

But it doesn’t end there. Since Two Gold Coins and a Prayer has come out, I have had the pleasure of watching a miracle unfold. Six months ago, I received an e-mail from a seventy-six year old woman from Israel who wrote, “I am the little Jewish girl in the attic of one of the safe homes your father stayed in during the war. I found your book on the Internet and realized I was reading about myself.”

It was true!  A Jewish family had been hiding in the attic of one of the homes in Rotterdam for two years by the time my dad was invited to stay there. He remembers the little eight-year-old girl. Two months ago, this ‘little girl in the attic’, Helen Berman-Cohen, flew to Seattle and was reunited with my father – after 67 years. What a blessing that was.

Even though the ‘manuscript for the family’ turned ‘published book to honor the brave Dutch civilians’ project has been completed, I am surprised by the good fruit the story continues to bear. If you ever have the opportunity to write a manuscript for your family, jump into the experience and hang on. You’ll be blessed with a wonderful adventure.

James H. Keeffe III is the author of Two Gold Coins and a Prayer:The Epic Journey of a World War II Bomber Pilot, Evader, and POW.

Below is a video of Helen Berman reuniting with James Keeffe Jr.