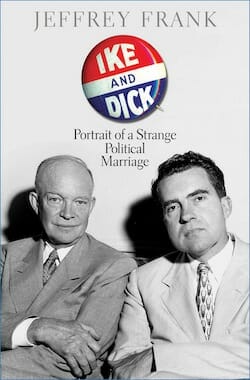 The Bookworm’s Book Review: “Ike and Dick: Portrait of a Strange Political Marriage” by Jeffrey Frank

You sometimes wondered why you were ever hired, in fact. From the beginning, he was critical, secretive, and never let you know you’d overstepped your boundaries until you’d run past them by a mile.

And you took the job anyhow. And you learned because you knew that the boss doesn’t have to like you. Still, it might’ve helped – but would that change history? Possibly… as you’ll see in the new book “Ike and Dick: Portrait of a Strange Political Marriage” by Jeffrey Frank.

After his service in World War II, Dwight “Ike” Eisenhower wasn’t sure he wanted the presidency. So many of Washington’s politicians were pushing him toward it, but the truth was, Eisenhower was more comfortable with his military and business friends than with politicians. He didn’t even know that the choice of Vice President would be his. With the help of a committee, he chose Dick Nixon from a list of possibilities.

Nixon and Eisenhower had met, briefly, once or twice before. Nixon, the consummate strategic politician, was young and energetic but not well-liked. He very much wanted to be on the 1952 ticket with Eisenhower, even though Nixon’s wife, Pat, was adamantly against any further campaigning.

Almost immediately after being chosen, scandal enveloped the gregarious Nixon.

The Democrats accused him of accepting secret funds, an accusation he escaped by refuting the charges on live TV (then in its infancy). But the mess was enough to put doubt in the mind of the reticent Eisenhower, who left Nixon dangling on the question of whether or not the latter was still on the ticket.

He was, though the same thing would happen again four years later when Eisenhower was asked to run again as the incumbent. He never seemed to be entirely comfortable with Nixon’s eager political wrangling, but he needed Nixon’s political skills, his adeptness in overseas diplomacy, and his Civil Rights work.

Later, he needed Nixon to be in charge when Eisenhower almost lost his life…

And, of course, the rest of the story is that we had Dick Nixon to kick around for many years to come. There’s much more to it than that, though, and “Ike and Dick” gives you the whole amazing story.

I liked this book, not entirely because of the political history that constitutes most of it, but because author Jeffrey Frank subtly pulled me into life in the 1950s. In light of the past few elections’ viciousness, what Frank shares almost seems quaint.

I was also very interested in learning about each man’s private personality, particularly that of Nixon. Curiously, the Nixon Frank writes about was not the same person who became President. Nixon as veep was breezier, perhaps, and savvier. His youth showed, and I was fascinated.

This isn’t a book for everybody but if you miss it, I think you’ll be sorry. “Ike and Dick” is definitely government-as-UNusual (in relation to what we have now), and if you’re captivated by that, then you’ll like it very much.