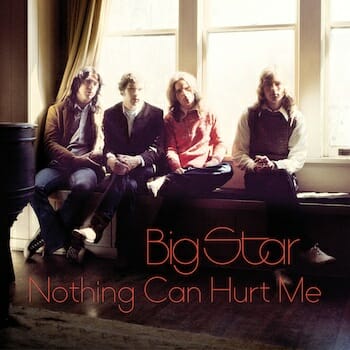 It’s been said that even though the Velvet Underground didn’t sell many records during the band’s lifespan, everyone who bought one of their records went out and started a band.

The same thing can be, and has been, said about Big Star, a Memphis-based band from the early 70’s.  Led by the creative team of Chris Bell and Alex Chilton (both on vocals and guitars) and backed up by Andy Hummel on bass and Jody Stephens on drums, Big Star recorded three albums before melting down.

And if you think you’ve never heard a song by Big Star or any of the band members, you are mistaken.  Alex Chilton was the teen-age lead vocalist for the Box Top’s smash hit “The Letter,” the theme song for That 70’s Show was a Big Star song (even though it was recorded by Cheap Trick), and the Bangles covered “September Gurls.”

Big Star was the right band at the wrong time.  Between the time of the break-up of the Beatles and the New Wave movement of the late 70’s, power pop was out of fashion.  And while Big Star’s more successful power pop contemporaries The Raspberries sang songs like “Go All The Way,” Bell and Chilton were writing  songs like “Thirteen,” a melancholy song of teenage confusion and longing:  “Won’t you let me walk you home from school/Won’t you let me meet you at the pool/Maybe Friday I can get tickets for the dance/And I’ll take you.”

Bands that came up in the 80’s like R.E.M and the Replacements were  influenced by Big Star (in fact, the Replacements had a song called “Alex Chilton” on their 1987 album Pleased To Meet Me and, to me, R.E.M.’s version of “Femme Fatale” owes more to the Big Star cover than the Velvet Underground original).  And the 90’s saw a major push to reissue the three Big Star albums as well as concert work by the band.

Which brings me to the news of the day. This year has seen the release of a documentary about Big Star called Nothing Can Hurt Me (a lyric from “Big Black Car” a song recorded during the Third sessions).  The film has been making the rounds of theaters across the country and has met with positive notices from The New York Times and The New Yorker (among other places). (I saw the film in Pittsburgh and it‘s a terrific movie with — need I say? — great music.  I saw the film with a guy who likes music but knows hardly anything about Big Star — he was knocked out and wants to listen to more.)

Along with the film, Omnivore Records has released a soundtrack album containing alternative versions and rough mixes of Big Star songs as well as mixes done especially for the movie (and new to me despite the 2009 Big Star box set Keep An Eye On The Sky which was full of alternative versions).  It’s available as a two-CD or two-record set (the kids like the vinyl and we did, too).

The soundtrack sounds great (the bass is WAY up in the mix) whether you’ve heard these songs before or not.  The music tells the story of Big Star in song, from the first album (#1 Record) with Chris Bell and Alex Chilton at the helm, through Radio City after Bell left and Chilton took over, to Chilton’s meltdown on Third (which, nonetheless, contains some great songs — and Omnivore‘s 2011 Record Store Day release used a test pressing to finally put Third in a coherent form).  The soundtrack album also includes some solo work by Chris Bell and Alex Chilton.

Like Alex Chilton sang in “Thirteen,” “Rock and roll is here to stay.”  And so, now,  is Big Star.