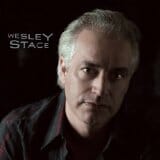 For 25 years the singer-songwriter John Wesley Harding has released albums overflowing with words about politics and love.  For his new album Self-Titled he’s gone back to his given name of Wesley Stace.  The name may have changed but the words continue to flow.

I didn’t really connect with JWH’s work until I heard the song “I’m Wrong About Everything” on the High Fidelity soundtrack. There was something about the song, and his 2000 album (The Confessions Of St. Ace [Stace — get it?!]) that I liked as soon as I heard it. The album also contained two other songs, “Same Piece Of Air” and “Old Girlfriends,” that seemed to also be songs he may have written for the movie and, together with “I’m Wrong About Everything,” made up a musical trilogy of sorts.

Speaking of “Old Girlfriends,” many of the songs on Stace’s new album are about old girlfriends — and the music that drew him to them and them to him.

“When I Knew” mentions Soft Machine and “Come On Eileen” (not in the same line so no rhyme is intended) and chronicles a relationship from misfit-teenage years to adulthood with (for me) an ambiguous ending (reminding me of a Raymond Carver short story).

The coolest girl in Canterbury is at the center of “A Canterbury Kiss” during a time of “music and the summer sun.”  She knows all about music and when she mentions Tim Buckley, Television, and Talking Heads the narrator confesses (to us, not to her) that “the limits of my knowledge had been reached.” But when she asks if he likes Hendrix, he tells her — even though he had yet to hear the guitar genius — “yes/untruthfully.”  And he is rewarded with a kiss from the coolest girl in town.  It’s a terrific song, lovely and full of innocence.

The album starts with the folky “The Dealer’s Daughter: “I loved the dealer’s daughter/so I joined her clientele.”  The acoustic guitars and lovely stings are a marked contrast to this tragic tale.

The highlight of the album is “We Will Always Have New York” — a love letter to the city and a fondly remembered  love.  It’s a trip through the city that name-checks the places where the narrator and his girlfriend had their major moments (I like the way he mentions the Squares): “It’s Union and Washington and Madison Square/It’s the long way back and  it’s a short way there/We fell in love/ I got scared/and you kissed me on West 4th.”  The tour includes Fifth Avenue, the Strand Bookstore, and the subway.  He also cleverly brings together music and sex: “the sound of vinyl when the record skips/and the scratches on my back.”

The travelogue in “Ride Your Camel” reminds me of Squeeze’s “Cool for Cats” and Stace cleverly rhymes Giza, squeeze, and Caesar.  It’s a fun ride.  “Wrong For The Part” uses the idea of an audition for a play as a metaphor for finding the right person for a relationship.  And “Pieces Of The Past” is about all of the people, books, and music that make up a person — it‘s a beautiful, reflective song.  The solo finger-picking of “The Woman” ends the album with a bluesy lament (it even references the Leadbelly song “Goodnight Irene“).

Self-Titled has a warm vibe and a consistent, laid-back sound that‘s perfect for a Sunday morning.  But it’s not what one might call easy listening — the album is  chock-full of smart, literate lyrics that reflect the talents of a born storyteller and asks that you pay attention to what is being sung.

With Self-Titled Stace is making a new/old name for himself.