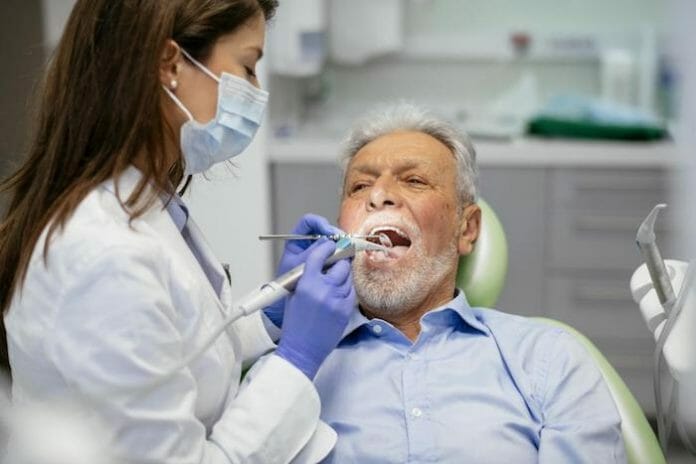 Conscientious parents constantly remind their children to brush and floss, and routinely schedule dental checkups to make sure their teeth and gums are healthy – and staying that way.

But youngsters aren’t the only ones who can use such reminders. Older Americans need to put a priority on their oral health as well, and research shows that as a group they aren’t doing so.

In fact, the statistics are grim. The Centers for Disease Control and Prevention reports that almost every single American over age 65 (96 percent) has had a cavity, and 20 percent have untreated tooth decay. Another 65 percent suffer from gum disease, an ailment that has been linked to a host of other problems, such as strokes, heart disease and diabetes.

“Anyone who thinks they can ease up on dental care as they age is making a big mistake,” says Dr. Harold Katz, a dentist, bacteriologist and developer of TheraBreath Healthy Gums Oral Rinse (www.therabreath.com).

“Not only do poor dental habits affect what’s going on in your mouth, they also affect your overall health.”

Some of the CDC’s findings that Katz says are troubling include:

“As you age, proper oral care is just as important as ever,” Katz says. “It’s not something you want to ignore because your overall health is at stake.”

Dr. Harold Katz (www.therabreath.com), developer of TheraBreath Healthy Gums Oral Rinse, received his degree in bacteriology from UCLA and is the founder of The California Breath Clinics and author of The Bad Breath Bible. He has been featured on ABC’s “Good Morning America,” CBS’s “Early Show” and “The View” with Barbara Walters and countless other TV shows. Dr. Katz has developed oxygenating compounds that have been used by millions around the world to eliminate bad breath. He is also the bearer of the now famous “Halimeter,” which tests the sulfur compounds in the mouth that cause bad breath. Dr. Katz’ website offers a free online bad breath test – as well as a sneaky way to tell someone they have halitosis.