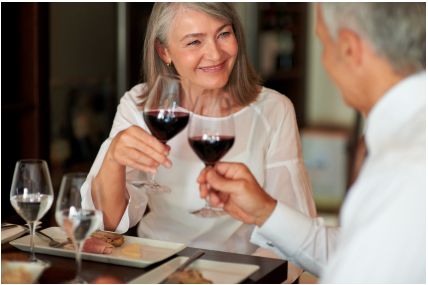 So you think marriage is for the young? Check this out: As of the last U.S. Census, more than 16-million unmarried Americans were 65 and older. But these single seniors aren’t willing to sit on their laurels; Between 2006 and 2007 there was a 140-percent increase in senior online dating.

Clearly the message that marriage makes you live longer has made its way to the over-65 crowd. Seniors also have learned the effectiveness of online dating sites. According to a 2011 international study conducted by the Oxford Internet Institute and funded by eHarmony, middle-aged men and women were the most likely people to use online dating sites, a statistic that particularly holds true for seniors.

With these glaring statistics to back up entrepreneurs, many new businesses have arisen catering to seniors interested in relationships. Here’s a sampling.

An interesting aside to this category is the research findings of two Bowling Green State University professors of gerontology. In the early stages of the study, they’ve found indications that seniors market themselves different on dating sites than their youthful counterparts. Appearance and status drop to the bottom of profiles while compatibility and self representation are priorities.

Soon-to-be-wed seniors likely don’t need another blender, so alternative registries are proving just the ticket. CardAvenue is a wedding gift registry that lets them register for desirable gift cards, including those for stores, airlines, gas, etc. Cloud9Living allows couples to register for desired experiences, like hot-air ballooning in the Rockies, taking gourmet cooking classes in Houston, race car driving in Las Vegas, and much more.

Personal wedding websites are the latest rage, and WedShare.com in particular has reached out to seniors with it’s easy-to-use message. The company provides a free domain name, customizable website themes and matching eCards, a monetary gift registry with PayPal, and much more. Other similar sites include MyWeddingHosting.com, eWedding.com and Momentville.com. To comparison shop, check out WeddingWebsites.com.

4. Therapy for the Kids

Roughly 500,000 Americans over the age of 65 remarry each year, and most already have adult children, according to Grace Gabe, a psychiatrist and co-author of “Step Wars: Overcoming the Perils and Making Peace in Adult Stepfamilies.” Remembering their parent’s former spouse, the kids may have trouble accepting a new relationship. This has opened up an entirely new species of therapist. While many cater to younger audiences, there are those who provide assistance to both young and old alike.

No longer a legal document solely for the rich, lawyers are creating prenuptial agreements designed specifically for seniors looking to protect their children’s inheritances or not interested in once-again paying alimony.

Kate Forgach is a Baby Boomer consumer specialist for Kinoli Inc. She has written about senior issues for 11 years as a Cooperative Extension specialist and for a wide variety of newspapers and magazines. She has been featured in USA Today, Detroit News, New Orleans Times-Picayune, New Yorker magazine, “ABC World News,” NBC’s “TODAY” show and many other media outlets.