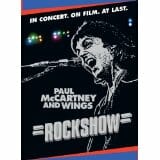 Despite his repeated efforts in the last years of the Beatles to get the group to perform live again (the initial idea behind the Let It Be project), the last time Paul McCartney performed in a live setting with a group in the 1960s was on the roof of the Beatles’ Apple office building on January 1969.  It would be another two years before he performed in a group again and another five after that before he would undertake a world tour.

After two solo albums (McCartney and Ram) McCartney put together a new group, Wings, and released the much-maligned Wild Life in 1971(always a contrarian, the second side contains four of my favorite McCartney songs).  In 1972, Wings filled two vans with the band, family members, and roadies for a University Tour.  According to an Uncut Magazine article from June 2007, “… Wings pull into a uni[versity] campus.  Their roadies ask the student’s union if they’d like a band to play. ‘No thanks.’ ‘It’s Paul McCartney.’ ‘Whaat?’”  It was a small start, but it was a start.

Wings then released three more albums (including their high-water mark Band On The Run) and, it seemed, it was time for a larger concert outing.  So Paul McCartney and Wings toured America in 1976, trading student union halls for places such as Seattle’s Kingdome, where a record 67,000 saw and heard a Beatle for the first time since the last Fab concert at Candlestick Park in San Francisco in August of 1966.

In December of 1976, Wings released Wings Over America, a three-disc live album consisting mostly of Wings songs.  There were, in fact, no songs on the live album from McCartney’s two solo discs and only five Beatle songs.  The live show presented Wings as a viable group on its own merits.  The album reached number one in the charts in early 1977.

The line-up for the 1976 American tour included Paul McCartney; Linda McCartney on keyboards; Denny Laine (late of the Moody Blues) on guitar, bass, piano, and vocals; the young guitar whiz Jimmy McCulloch on guitar, bass, and vocals; Joe English on drums; and the first and only horn section for a McCartney concert tour — featuring long-time McCartney friend from Liverpool Howie Casey.

This year, as part of his Archives Collection, McCartney has remastered Wings Over America and issued it in a number of formats.  The deluxe box set includes the original three-record set on two CDs along with a previously  unreleased 8-song CD from a concert at the San Francisco Cow Palace recorded during the Wings Over America tour.  The songs on the Cow Palace CD are also on the official version of the concert but the playing is a little looser and includes between-song chatter missing from the two-CD version.  It’s also the only venue-specific recording from the tour (the original, now remastered, concert was recorded in a variety of places during the tour). The box set also includes a DVD of the television documentary Wings Over The World and four books containing essays, photos, drawings, and a tour schedule.

Wings Over America also comes as a standard two-disc version and, depending on where you buy it, can also come with the Cow Palace disc (this is the version I‘ve been listening to).

So — what’s it sound like?  Remastering, when done right, can really add a lot to a recording and Wings Over America has been done right.  McCartney was only 34 (none of the Beatles had yet to hit 30 at the time the group broke up) when Wings toured the States and, if not at the height of his creative powers he was certainly at the height at his ability to perform before an adoring crowd.  You can hear it in his singing, from concert highlights like “Call Me Back Again,” “Maybe I’m Amazed,” the gorgeous “Bluebird,” and “The Long And Winding Road” along with lesser songs like “Magneto and Titanium Man” and “Beware My Love.”  (The concert begins with “Venus and Mars/Rockshow/Jet,” a combination that McCartney used when I was lucky enough to see him in Pittsburgh three years ago.)

On Wings Over America, you can sense and almost see McCartney’s enthusiasm in being on the road again.  Well, you actually can see his enthusiasm for being on the road again in the film accompaniment to the audio concert recording.  Rockshow was filmed during the Wings tour and, except for a release on the ill-fated Betamax format has never been commercially available for the home video market (portions of the film were included on The McCartney Years DVD set that came out a few years ago).

I didn’t know that I would be saying this until I watched the film but, if you’re going to have to choose between buying Wings Over America and Rockshow, I would recommend you purchase the latter.  As it says in the essay contained in the Rockshow package, after the break-up of the Beatles and the struggle to get Wings off the ground, “… Paul McCartney is happy … He grins from ear to ear as each song is accepted.”

There’s also more of a band feel in the film.  Each member has song introductions and what made the biggest impression on me is the graciousness that McCartney shows in giving center stage over to Denny Laine and Jimmy McCulloch for their solo spots.  He steps back and the film focuses on the other performers.  McCartney becomes their back-up singer for the duration of the song — and who could possibly be a better back-up singer!

One of the highlights of the concert (on the CD and, perhaps, even more so in the film) is the sit-down, acoustic, Unplugged-before-its-time set with “Picasso’s Last Words”/“Richard Cory”/“Bluebird”/“I’ve Just Seen A Face”/“Blackbird”/“Yesterday.”

Paul McCartney put Wings together because he wanted to be in a band again and he wanted to tour again.  Beginning in 1976 he started to tour the world and continues to do so.  He recently turned 71 (!) and is out on the road once more,  performing songs from his solo catalog, as well as his time with the Beatles, Wings, and The Fireman, for adoring fans and putting on a great show that leaves audiences suitably gobsmacked.