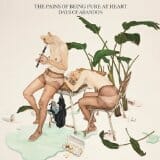 The first best thing I’ve heard this year is the third album by the Brooklyn-based band The Pains Of Being Pure At Heart. Back in 2010 I saw a concert listing for the band in the New York Times and thought “This looks like it’s the melancholy pop that I really like.”

And although the CD wasn’t all that melancholy, I loved it at first listen and it went right onto my mp3 player and into my Top Five list for that year. This first self-titled album was full of musical references I recognized and liked including My Bloody Valentine, The Smiths, and, more recently, Stars. The sound was a bit grungy but very poppy.

Two years later, the band released Belong. With a bigger, and in some ways a cleaner, sound they kept the pop and the music press seemed ready to anoint them to arena status. It was a big leap forward without losing any of the things that made me like them in the first place.

In May of this year The Pains Of Being Pure At Heart released the brilliant Days Of Abandon. Although between the second and third album the group lost two of its founding members — a keyboard player and a bass player — they‘ve more than made up for it. They’ve added a new bass player, but more importantly, they’ve added Jen Goma on vocals and Kelly Pratt on horns. With a female singer the band has ventured into Prefab Sprout, The Go-Betweens, and The Beautiful South territory (a few of my favorite bands).

The new album opens with the lovely “Art Smock” and then kicks off the pop with “Simple And Sure.” There’s a terrific burst of guitar by lead singer and songwriter Kip Berman in “Beautiful You” and the jangle in “Masokissed” has Johnny Marr’s fingerprints and guitar licks all over it.

Jen Goma’s wonderful lead vocals on “Kelly” and “Life After Life” (as well as backing vocals throughout the album) add new colors to Berman and company’s songs — and at the end of “Eurydice” she sounds as if she’s channeling Pat Benatar.  Kelly Pratt’s horns on “Life After Life” and “The Asp At My Chest” — a gorgeous song — add just the right shadings.

With every listen this album continues to knock me out. That’s why Days Of Abandon is the first best thing I’ve heard this year.