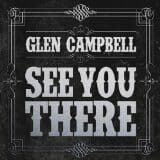 One of the best — and yet, the saddest — musical treats of 2013 was Glen Campbell’s album See You There.

Why sad? In case you hadn‘t heard, See You There will be Campbell’s final album. In 2011 he announced that he had Alzheimer’s disease and would go on a Farewell Tour in support of the album Ghost On The Canvas. By all accounts the concerts were a tearful celebration of the man and his recording career — a recording career that included work with Phil Spector and the Beach Boys as well as singing great songs by Jimmy Webb and John Hartford. And oh, yeah, he had a very, very successful television show that ran from 1969 to 1972.

I had read that See You There was made up of leftovers from Campbell’s recording sessions for Ghost On The Canvas. I didn’t hear that album but something made me seek out the new disc.

Well, I have to tell you See You There sounds nothing like a collection of leftovers. Not only does Campbell sound really good — a little shaky sometimes but given his age (he’s 77) and medical condition that might be expected — and the CD is chock-full of his hits. That was something I did not expect.

See You There includes “Wichita Lineman,” “Gentle On My Mind,” “By The Time I Get To Phoenix,” “Galveston,“ and “Rhinestone Cowboy.” On the first four of those songs Campbell sings as a man who has led a full life and fills the songs with his knowledge of that life, and “Rhinestone Cowboy” is less of a celebration than the original but is instead a melancholy look back. Other songs that are new to me such as “Postcards From Paris” and “What I Wouldn’t Give” are beautifully sung and played.

Glen Campbell has given us a lot of great music and See You There is a wonderful close to that career.

Henry Lipput is a writer living in the Pittsburgh, PA, area. He has written for a telefundraising company, defense contractors, and engineering companies. He has also written freelance articles on specialty advertising, health care, small businesses, and general interest topics for both national and local publications, including CD reviews for the late, lamented Pittsburgh Boomers.